A few days ago I finally skied the NW couloir on Mt. Burgess, a 4000' line I had been wanting to take a closer look at for about ten years. When staring up at it from the Emerald Lake, one of the signature landmarks Yoho Park is famous for, it's a very obvious split in the North face of Mt. Burgess. However, several doglegs, a narrow exit, and a rocky entrance all make it a little more complicated and intimidating. Would it be worth the effort, and would it go, were the big questions. Accompanied by Joshua Lavigne and Magda Kosior, we went to find out, and were rewarded, with not only what was probably a first decent of a sweet couloir in fine powdery conditions, but from a beautiful summit as well. I love to have "unknowns" to look forward to, and that was the theme of the day. The weather was ok, but both flurries and sun were in the forecast, either of which could have shut us down. We carried a 60 meter rope and a few pitons, but would it be enough for the mixed section? If we made it to the top of the couloir, would the cornice be passable? If it was, would there then be a way around the corner to the final summit slopes? The answer was yes to everything.

The "climbing" we did at the bottom to access the couloir was on the rocks, and not the way we came down, or where we'd recommend to others to ascend. Staying left and climbing two 5 meter sections of 70-degree ice, separated by a snow bench, would be better, and was out line of descent. Crampons and two tools needed! We left a piton station on climbers left, although if you're a competent ice climber, you'll probably just solo up and down this section with your skis on your back. I easily down-climbed it after the other two made a long single-strand rappel. I could even see shredding it in exceptional conditions for an exceptionally bad-ass shredder! If you choose to rappel / belay it, you may want to either bring more gear to add a midway station, or a second rope. It looked like there may be some cracks on the snow ledge that would take nuts or pitons. All said and done, it only took 6.5 hours car to car, and the elevation difference from lake to summit is about 4000+ feet. The couloir itself probably averaged about 45 degrees, with a few turns in the 50-55 degree range, and was constantly winding around snow mushrooms and rock fins coming off it's sidewalls, making it a little more interesting than just a straight-shot pipe. There was a very large cornice perched above, so beware and start early if you're going there on a sunny day. We'd highly recommend it to others -- it's very good bang for the buck, there are not so many lines of this nature, right beside the road. I'm sure this one will see some more descents as the beta gets out there. Yeee doglegs! Read up on more of Jon's adventures in the mountains at www.AlpineStyle.ca

If you're recreating in the mountains near or far, odds are Jon Walsh has been there, and put up a first ascent or descent while he was at it. A true adventurer, Jon is renowned for his constant pursuit of new ice climbing routes, alpine climbs, big wall ascents, and unskied lines in the Canadian Rockies and beyond. 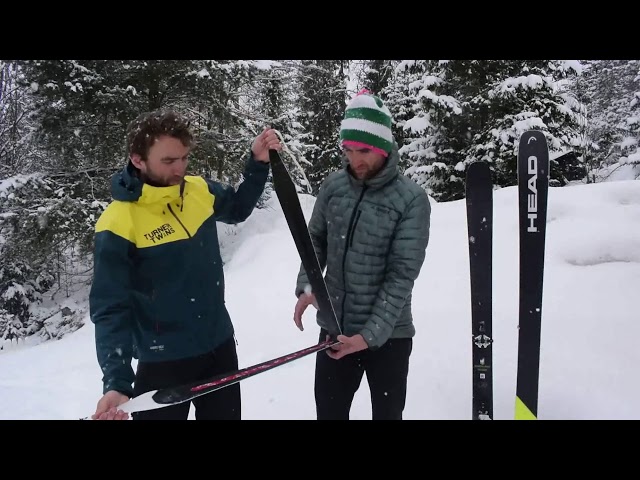 How To Fold Climbing Skins In High Winds Read More