If you’ve never thought of skiing on Black Tusk, you aren’t alone. There’s few who can look at a vertical pile of rock as brittle as feta cheese and decide they want to go play on it. But I’m among that weird group of dreamers, and for years I’ve held onto my suspicion that the icon of the Coast Range held funky ski mountaineering that is as beautiful as it is absurd.

Ian McIntosh and I had been tent bound on a glacier for the better part of a 14 day trip filming a foot-powered ski mountaineering trip with TGR so I had plenty of time to convince him to come with me to investigate if there were skiable lines.

Mac skied a first twisting couloir solo, while I shot pictures from afar. You can read about his line in detail, along with additional photos in Forecast Ski Mag this month. IAN ON HIS WAY UP.
PHOTO BY REUBEN KRABBE

After Ian scuttled humbly out of his spicy line we approached a second line that faces Whistler Mountain. On a regular snow season, the spine-moraine feature is separated from the ski-and-a-half width couloir by a large vertical drop. However by the end of the amazing 2017 season, the gap was foreshortened by sluff to a manageable snow-ice-dry tool ascent. NOT A BAD VIEW ON THE APPROACH.
PHOTO BY REUBEN KRABBE After ascending the low crux and runneled hallway, the line opens wide into a funnel shaped amphitheater with volcanic spires and fins. Atop the Bishops’ Mitre (the volcanic crumbling towers on the North side of the Tusk) we were greeted by an up-close and personal view of tusk that has rarely -or ever- been seen. The same angle you’d recognize as from Whistler Mountain, but from underneath, up close, and personal. In baking hot April sun, rocks were raining off the eastern side of the Tusk. As for the descent... First Nations call the mountain Landing Place of the Thunderbird, which feels both more beautiful, fitting, and eloquent than Tusk. Hope to hear more of y’all calling it by it’s traditional name in the future. REUBEN IN HIS ELEMENT
PHOTO BY REUBEN KRABBE 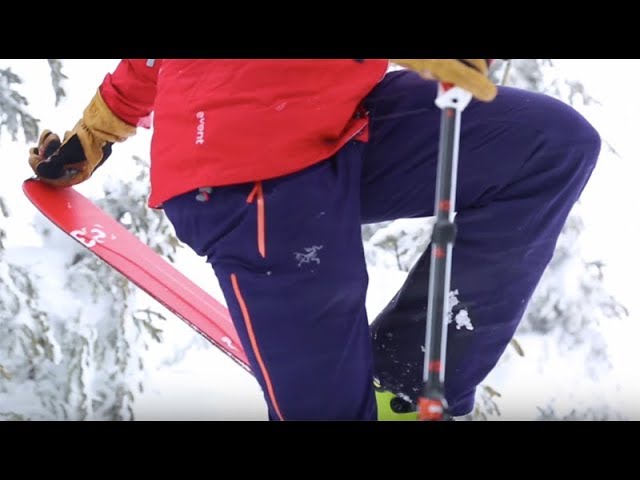