G3's newest athlete, and first SPLITBOARDER on the team, Joey Vosburgh, checked in with an update from big lines and good times last week...

Thursday February 2nd was anticipated like Christmas morning to a 5 year old. Except instead of Christmas it was the start of high pressure, and instead of 5 year olds it was 5 eager adults with a summit in their sights.Avalanche Mountain towers over Rogers Pass and can be seen from many other RP classics. On this morning Danyelle Magnan, Christina Lusti, Aaron Chance, Bruno Long and I started up the south side of avalanche basin. The sun was out but a thin layer of clouds protected the steep snow from sun affect.


Once in position for the crux of the ascent we decided on the more direct bootpack up a south facing couloir. After 25 steep kick turns the group decided to boot the rest to the ridge. It was becoming obvious that the day was going to finish with a cracka sunset... we were all pretty excited to be where we were. A couple more hours of booting and technical exposed skinning led us to the summit. High fives were being tossed around as the sun was burning away the thin clouds.

What was left was the ever sought after alpine glow and a 5000' run. We shredded the "Vent Shaft", Avalanche Mountains North couloir that turns west and deposits you into a large bowl which seems like endless turns. However, the run did end, and we were all left vibrating from the epic day of ski/snowboard mountaineering in Rogers Pass, BC. 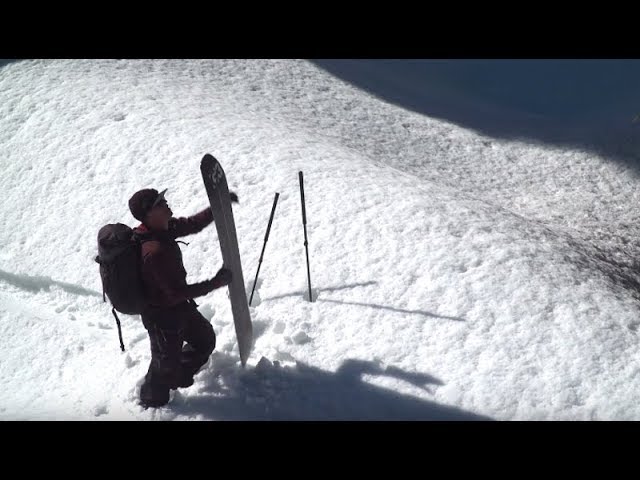