Stability was very good and the forecast was for clear skies. Sun on steep solar aspects was our only concern. Plan A had a large steep south face to ascend and a north facing summer alpine route to descend. The group decided quickly that we didn’t want to spend hours on that south face while it warmed up. So plan B it was. Only we didn’t have a plan B... yet. We rambled through ideas on the drive and scrubbed the usual stomping grounds. We wanted something new and adventurous, and settled on going for Copper’s N.Face.

The up was classic McGill shoulder and we pushed beyond into the 4th class ridge. Two or three ridge bumps later we found ourselves atop a nice 300m couloir. Some nice turns led us to the glacier directly below Copper’s S. Face. The sun had not been as hot as forecasted and the broken clouds kept the snow cool so we saw no threat in bootpacking up the last 200m. This was a new summit for all of us and the high fives were a plenty. After mitigating the cornice on the North side we all had a look down this beast of a line. A steep hanging face off the top led to a left turn into one of two couloir entrances. We weren't sure which one to take but we knew only one of them was clean. With 900m of mountain below you want to choose wisely. Instead of making a blind guess we called our buddy Mark Hartley for some beta. “Take the upper one,” he said. Beta you can trust as he is one of the few others that has been down N. Copper. The hanging face was a blast but pretty chalky, hoping the protected cooly was softer we inched forward into it. The first 80m was 55 degrees and 4 to 5 feet wide in some spots so moving slowly was paramount. Regrouping below this pinch had us all staring down the next 700m of 45-50 degree planar couloir. Unfortunately the sliding was as bad as it gets. It became more and more obvious that this whole couloir had been bombarded by debris days before. We all sketched our way down hoping that the next flank would have something soft to slash. No luck though. Hard as rock and extremely bumpy all the way to Ursus Creek. Ouch! Last part of the couloir, plenty of riding still ahead. Joey Vosburgh photo.
The way out to McGill pass was stunning, with the evening glow on the peaks and the soft up track we shuffled forward. From the pass I think I blacked out. Vague memories of a couple hours of creek bashing and side stepping... it's all a blur now. I just remember the good times.Thanks for the day Aaron Chance, Greg Hill, Bruno Long. Climb back out. Joey Vosburgh photo. 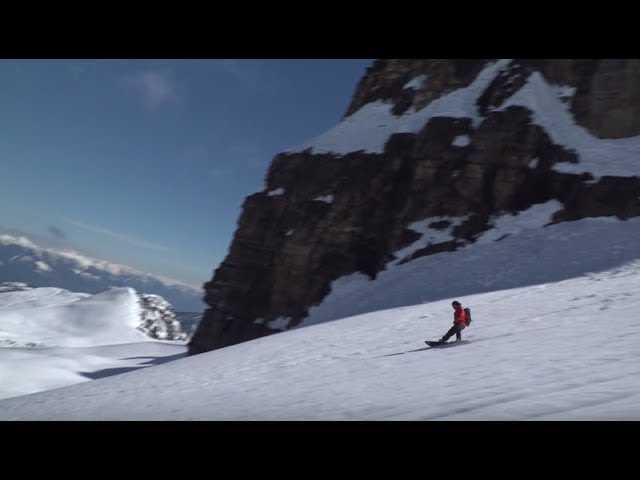