G3 is a big fan of perseverance - its one of our core values. So we couldn't help but be excited to see G3 skier Andy Traslin succeeding on his 4th attempt to ski this line...

If at first you don’t succeed, try, try, try again. But really, four times? Four times is an obsession. Each trip requiring 40 km and 8000 feet of climbing.

If you're looking straight ahead from the top of Whistler's Peak Chair, you'll see a face that appears to be skiable; Castle Towers NW face. Its nestled in a unique and alluring location; close to a huge city like Vancouver and a stone's throw from Whistler Blackcomb. Yet its a loooong way by foot and quite tucked away, despite how visible it is from much of Garibaldi Park. The mandatory access slog may be a good thing after all, as most people stay away from this option. My first few trips were with a friend Sky Sjue. Both of us were on a mission to link-up multiple peaks along the way, but fell short with weather and fatigue. Mike joined us for another ultra-marathon on skis, which included Mt Carr East face, Mt. Davidson and Castle Towers, but not the NW face. The last time I had to watch as Naomi and Sky rappelled in from the top to ski powder, just as the rope got stuck for my turn.

The obsession continued. It was hard to find people to take the undertaking, but this time Naomi was keen. She wasn’t so keen for the springtime Garibaldi Lake crossing, but who would be, knowning the 5km cross country ski across the lake would have to be retraced at the end of the day. But it wasn't a show stopper, so we set out.

The AVI remains the choice for those who want a reliable tool in case of a backcountry emergency, as well as an easy to use...

We slogged across the lake and made it to the summit in less than eight hours. The original plan was to rap in from the summit but conditions were exposed with massive bergschrunds. So we skied off the top and found an entrance to the skier’s right. Conditions were heating up. There was a moment I was thinking we were going to be stuck skiing down the up route instead. Then I made the decision to go for it. I didn’t think I was going to come back for another round. I squeezed in underneath a large cornice and tentatively made some jump turns on firm snow to a safe spot where I could watch Naomi. We were committed now and the tension of crossing the bergschrund was looming. We jumped over it and made it safely, then descended through the maze of crevasses and old avalanche debris, earning a true feeling of really being 'out there' and exposed.

These are the moments I live for; it feels almost other-worldly. Making your own decisions with no guidebook or GPS coordinates. You pick the route amongst bergschrunds, cornices, and old fracture lines and avalanche debris. Trust your intuition that this route is with you. And sometimes it works out. 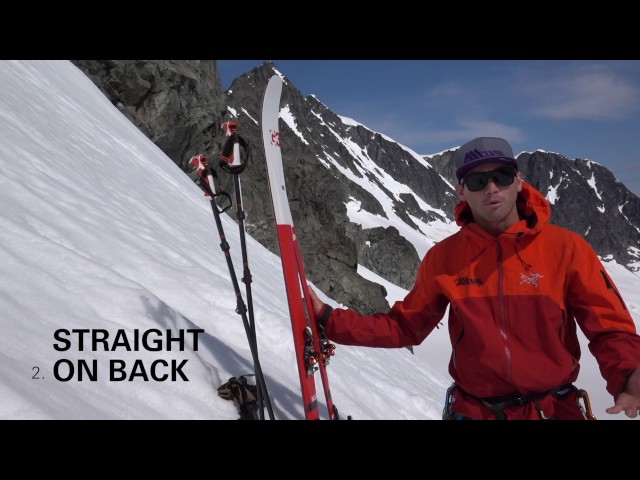